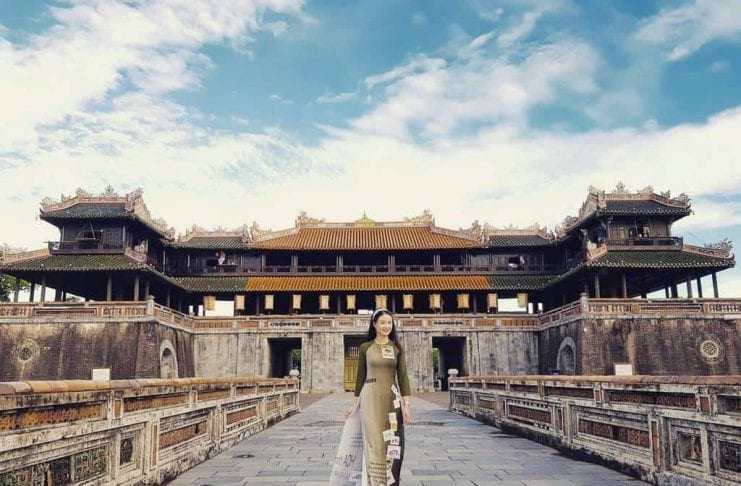 Huế is a city chock-full of stories. The Kings of the Nguyen Dynasty built their feudal capital along Huế’s fertile riverbanks and atop its forested hills, but their imperial legacy is just one of many reasons to visit. Huế’s refined cuisine is the stuff of legend, and its leafy streets are lined with mossy pagodas, art déco mansions, and eye-popping markets. Through the whole scene flows the Perfume River, setting a languid pace the rest of the city is happy to follow.

TOP THINGS TO DO IN HUE:

Get acquainted with Vietnam’s last royal dynastic family by exploring what survives of their 143-year reign. The Complex of Huế Monuments, feautring the Huế Citadel is hugely significant territory. Roam its palaces, pavilions and theatres and you may still catch echoes of life in the Imperial Court. Journey along the river to the tombs of Tu Duc, Minh Mang and Khai Dinh. Enveloped in greenery and guarded by fierce mandolins, these tombs evoke a striking harmony between nature and architecture.

You’re never far from a world-class meal in Huế. Nose around the flapping-fresh produce at Dong Ba Market for a teaser, then whet your appetite with Huế’s much-loved snacks, such as banh khoai and banh beo. Roving vendors can roast you a banh mi or whip together a swoon-worthy bowl of bun thit nuong in seconds. There’s even a ‘vegetarian street’ in Huế, evidence of the city’s devout Buddhist roots. Foodies can’t miss the chance to try bun bo hue in the city of its origin.

Nowhere is Huế’s serene atmosphere more penetrating than in its pagodas and monasteries. Tu Hieu Monastery is where Buddhist author and activist Thich Nhat Hanh spent his days as a novice monk. Here, tombs of imperial eunuchs rest alongside footpaths and lotus ponds, and the monks play football in the late afternoons. See the iconic seven-tiered tower of Thien Mu Pagoda and park your bicycle outside the Dieu De Pagoda for a glimpse inside.

Cycle in the ride paddies

Huế’s photogenic streets and lush countryside are a wonderland for casual cyclists. The ride to the tile-roofed Thanh Toan Bridge is one of Huế’s most captivating, winding past vegetable farms, footbridges, and flocks of ducks. In town, cycle Le Loi and Bach Dang–one of Huế’s classic streets–for scenes of local life. For a more leisurely option, hail a “xich lo” for a tour around the city.

Travelers with an eye for architecture will enjoy seeing what remains of French influence in Huế. Stroll down Le Loi to encounter five enduring colonial structures. You can’t miss the nautical, art déco lines of La Residence Hotel, the stately crimson buildings of the Quoc Hoc High School, the Gustave Eiffel-designed arches of Truong Tien Bridge, and the over-the-water veranda of Le Cercle Sportif.

Head for the hills

Grab a gulp of fresh air and stretch your legs in the hills nearby. Pine-covered Thien An is the perfect spot for a long and lazy picnic lunch. Come sunset, join the locals admiring the view from Vong Canh. For a real workout, challenge yourself on the lofty trails at Bach Ma National Park.

Start off as early as possible to see Thien Mu Pagoda, then take your time at one or more of the Imperial tombs of Minh Mang, Tu Duc, or Khai Dinh. Refuel with a bowl of bun thit nuong at Huyen Anh, before taking on the sprawling Huế Citadel. Later in the afternoon, have a calming walk around the Tu Hieu Monastery, then climb aboard a cyclo for a ride at dusk.

Fill up on a supremely satisfying bowl of bun bo hue before delving into the chaos at Dong Ba Market. Spend your morning either cycling to Thanh Toan Bridge, or hire wheels to see the impressive tomb of Emperor Gia Long. Back in the city, lunch with the locals at Hanh, then pick up some cultural insight at An Dinh Palaceand Tu Cung Residence. If you have time, walk the length of Le Loi, stopping for a café sua da and any sights that catch your eye. Watch the sunset from Vong Canh Hill, or take an evening cruise on the Perfume River.

Huế’s springtime months, from February to the end of April, show the historic capital in its best light. In June and July, prepare for scorching days. The rains come in August, and can last all the way through January. It’s worth noting Huế experiences some flooding, usually from October to late in the year.

Domestic flights from Hanoi and Ho Chi Minh City touch down in Huế’s Phu Bai Airport, a 30-minute drive from the city. Travelers also can hitch a train to Huế on the Reunification Express line, ride the open bus or hire a private car from the international airport in Danang, two hours away.