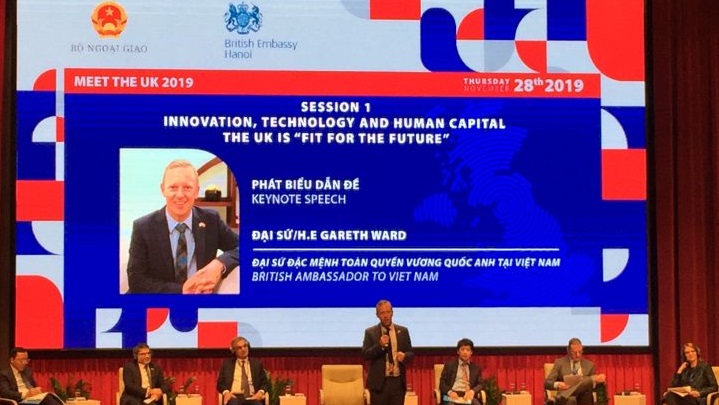 Forum gathered high-level British and Vietnamese leaders to discuss how to boost the strategic relationship between the UK and Vietnam.

“Meet the UK” was co-hosted by the Ministry of Foreign Affairs (MoFA) and the British Embassy in Vietnam on November 28 in Hanoi with the participation of high-level Vietnamese and British leaders.

Through dynamic presentations and lively panel discussions, as well as an interactive exhibition and networking sessions, over 700 participants were introduced to the UK’s various offerings in innovation, technology, human capital, soft power, culture, and diversity.

2020 is building up to be a landmark year for both the UK and Vietnam. While Vietnam will chair ASEAN and join the UN Security Council as a non-permanent member for two years, of which the UK is a permanent member, the UK will host the 26th annual UN Climate Change Conference, COP-26, in November. More importantly, the two countries will also celebrate ten years of a strategic partnership that has helped strengthen and deepen bilateral relations.

“This is a unique opportunity for the UK Government’s team here to interact with the whole of Vietnam,” Ambassador Ward said ahead of the event. “I am excited and grateful to MoFA for the opportunity. The UK’s relations with Vietnam are going from strength to strength and I’m sure 2020 will be another landmark year for the two countries.”

Technology is having a profound impact on the world. In the first panel discussion, Ambassador Ward spoke of how the UK and Vietnamese policies on innovation are compatible and how the UK’s economic priorities put the two countries in a great position to partner more closely towards achieving Industry 4.0.

Research and innovation are global and will be the subject of much discussion over the next ten years. Climate change response will also be a priority for the UK and it wishes to cooperate with Vietnam in this regard. It is forecast that 40 per cent of the Mekong Delta will be inundated by climate change.

Areas related to artificial intelligence (AI), clean growth, and population aging are also upcoming priorities for the UK in cooperation with the government and the Vietnamese business community.

In his address, Ambassador Ward also introduced the upcoming launch of the Al Pulse medical app from Prudential and its partners in early 2020, which will help reduce 10 per cent of the number of people going to hospitals for diagnosis in Vietnam, reducing the burden on the country’s health sector.

According to the Ministry of Industry and Trade, Vietnam ranks 38th out of the 241 trading partners of the UK and 25th out of 233 countries with large export turnover to the UK. Among ASEAN countries, Vietnam ranks second after Thailand in exports to the UK, accounting for more than 3 per cent of the total.

For Vietnam, the UK is its third-largest trading partner in the EU. In the 2010-2018 period, bilateral turnover growth averaged 17 per cent higher than Vietnam’s growth rate, which reached 60 per cent compared to 2011. Growth has levelled off in recent years.

Regarding investment, the UK is in the top 20 countries investing in Vietnam, mainly in the fields of oil and gas (65 per cent), heavy industry (30 per cent), light industry (3 per cent), and banking – finance – insurance (2 per cent). As at October, there were 351 British investment projects in Vietnam.

“The development potential is huge and the two countries are interested in promoting and developing cooperative relationships,” said Mr. Ta Hoang Linh, Director of the European-American Market Department at the Ministry of Industry and Trade. “Challenges include the impact of protectionist policies and the negative impact of climate change on production pushing up costs. Vietnamese businesses should pay attention to trends and policies and the requirements related to exports to the UK, as there is a trend towards consuming organically-certified agricultural and aquatic products.”

In the first session, with the theme “Innovation, Technology & Human Capital: the UK is Fit for the Future”, Mr. Nirukt Sapru, General Director of Standard Chartered Bank Vietnam, said that Vietnam faces two challenges in the future due to its failure to deliver green development, environmental protection, or upgraded workplace skills.

Mr. Nitin Kapoor, General Director of the Astrazeneca Company in Vietnam, believes that in the long term, the support from the Vietnamese Government to local enterprises will promote development in the future, despite Vietnam facing challenges in the short term.

In the second session, Mr. David McNaught, Political and Prosperity Counsellor at the British Embassy, took participants on a journey to the UK to introduce them to the four countries that make up the UK: England, Scotland, Wales, and Northern Ireland. He spoke of some of the things that make the UK – as a whole – a great place to visit, study, and do trade and investment with.